What I want in a partner:
What I don’t want:
One of the mistakes I made early in the last relationship was to contribute financially well over the level of being self-supporting. When I got laid off, I couldn’t do that anymore. While I was training for a new career, I contributed right at the level of being self-supporting through my severance pay, and later, through acquiring credit card debt. But it was so much less money than they were used to.
My spouse deeply resented the reduced level of contribution and saw it as changing their life without their permission, because I chose to train for a new career instead of starting over in my old one (which is what happens when you get laid off – in my industry, nobody hires at higher levels from outside the company – you start at entry level again). It didn’t matter that a new job would still not pay enough.
Also the layoff happened just after I had borrowed a lot from my 401k for a project, so I was trying to pay back the loan so as not to incur a heavy tax penalty. My spouse blamed my project for changing their life as well, even though commitment to carry out that project was made plain before we ever married.
Sorry I’m not explaining it well without anonymity-breaking specifics.
Another mistake I made was justifying making my career decisions unilaterally as long as I was meeting my 7th tradition. Right or wrong, my spouse felt left out. It would have been more respectful to fully discuss these things beforehand.
In any case, my business in my new career didn’t take off soon enough to prevent me maxing out the credit cards, so it became necessary to fall back on the old career and, yes, start at entry level, which is where I still am now. It’s taken a few years to pay off all that debt, plus defaulting on the 401k and assisting them with their tax burden.
In my next relationship (if any), I want money to not be a factor.

Here’s an example of an item on a control list.

The sticky note indicates how my “can control” column gives me ideas for forming boundaries.

Twice in recent times I’ve gotten into trouble by thinking that I could change my attitude just by deciding to. I’ve thought I could refocus my obsessions just by recognizing them for what they are and trying like hell to think of something else. Invariably, my mind returns to that which is upsetting me in short order.
I forget sometimes that everything has a process. When I decide to turn my will and my life over to the care of my Higher Power, it hasn’t been accomplished yet. Doing the rest of the steps is the how, the process. The same is true of forgiveness. I’ve never been able to just up and forgive anyone through sheer force of will. It only ever happened as a by-product of a vigorous fourth step.
So it is with changing my attitude. I have to do a process. One great process I sometimes forget to use is the first process my first sponsor taught me – the control list.
I take a piece of paper and draw lines vertically that divide it into three columns. In the first column I list something that is on my mind. In the second column I list all the aspects of that situation that I cannot control. In the third column, I list the things I can control.
This process serves a few purposes. First, it organizes my thoughts. When they grind around in my head, they are unclear and infused with emotion. Second, it makes clear what concerns I can let go of. Whatever I can’t control, I feel absolved of responsibility for. Third, the column of things I can control gives me ideas for how to build my boundaries. I can decide what to do to take care of myself.
All of this gives me a feeling of purpose and optimism. I feel less lost and more able to meet my situation sanely. That’s a much better attitude!

Am listening to The Recovery Show right now. This is not an Al-Anon podcast, but Al-Anon members share their experience, strength, and hope in an anonymous fashion. I like it!

What’s the difference between … ?

Can you think of more differences to explore? Please feel free to share!

Sometimes one day at a time is too much to expect, and I have to hand my concerns over to God one hour or one minute at a time. I can do that. This is particularly helpful against worry or obsession over an event in the future. I just give it to God for the next [period of time] and then do the next right thing. Right now I’m at work so the next right thing is the work task right in front of me. Easy, right? Well, simple, anyway. Not always easy.

I have a road trip coming up soon. One of my favorite things to do is visit Al-Anon meetings in the places I go. It’s pretty easy when it’s a business trip because my evenings tend to be free, and most places of population have a few meetings in the evenings.

When I’m visiting family it’s a little harder but still sometimes doable. If a family member has a commitment they need to attend, all too frequently there’s an Al-Anon meeting at that precise time that I can attend as well. That happens to be the case for one leg of this trip.
Sometimes places have very early meetings. Since I rise a bit earlier than many of my family members, I can pop off to one of these without missing any time with them. That happens to be the case on another leg of this upcoming trip as well.
Somehow my HP makes it possible for me to attend at least 1 meeting roughly every 3 days. I like that a lot.
I’m also finding some meetings in rather remote places. I like that a lot too.

The Al-Anon website provides a selection of podcasts that I am finding helpful, especially as I live in an area where meetings are few and hard to get to with my work schedule. On the website, the organization of the podcasts is not obvious, but they are also available at iTunes (search for Al-Anon), where they are sorted into three subscriptions:

I am grateful these exist and grateful for the people who make them available. I hope others find them as helpful as I do. 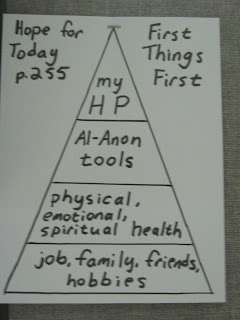 I can feel myself getting stressed out and worried and anxious and tense. Stress related ailments are bothering me more.

I know this is a clear signal I am not working my program. It’s not news – with my current work schedule, nearly all local meetings are unattainable. Still, there are phone meetings and online meetings which I fail to remember, or remember too late.
Still bogged down on Step 5. Have lost my Paths to Recovery, my primary study guide for the Steps. But that doesn’t mean I can’t study them. I may have to wait for payday to get another copy, but I do have other books. There is no reason I can’t use them.
In a little while I am going to take a lunch break and do a phone meeting.
This triangle is drawn according to the passage in Hope for Today p. 255 and does a really good job of illustrating why I am out of sorts. My own priorities have been topsy-turvy. To my credit, I have been remembering to take care of myself (go to the bathroom, eat, get things to drink), but I’ve been keeping my Al-Anon tools and my Higher Power at the bottom. That’s not balanced.
I pray to be more mindful of these things to bring my life back into balance and regain the serenity I have found in the program.