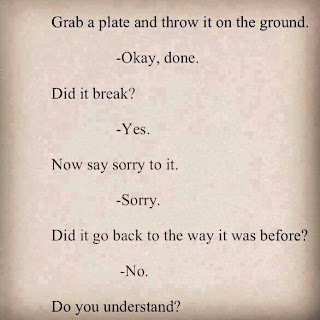 My sibling posted this on Facebook. It’s funny this popped up right after I received a response from another sibling, a qualifier, to my 9th Step letter. The response was that what I did was unremembered and so far in the past, not to worry about it. It was loving and forgiving. I cried.
The illustration makes a point. I can apologize all day and all night and not make a damn thing better. Amends is more than apology. It is, as the word indicates, about mending. It’s about healing and making things right. I know not everyone will forgive me, and we won’t all go back to being pals, but if I clean up my side of the street and do all I can to mend the situation, I’ve done what I’m supposed to. I can look other people and myself in the eye. I gain integrity, and that’s important in defeating the family disease.

9th step For The Win! Actually, this is extremely weird and uncomfortable, but I’m sure it’s doing a lot of good.

Unexpected twist – reaching out to people on Facebook to get their postal address, so I can send them letters. They ask me what for. We do, after all, live in a post-postal (heh) society. So when I tell them I want to make amends, we wind up doing it all in Facebook.

Very weird. Very uncomfortable. So far each encounter has ended well, and I know what to do if it doesn’t.

Tomorrow I have phone calls to make.

I was recently cold-called by a property investor in the part of the country where I lived before now. There was a message on my voicemail vaguely mentioning distressed properties. Part of the meltdown that was my Al-Anon bottom had to do with losing a house, only it doesn’t seem I actually lost it. I’m involved with a “bank walkaway”, apparently.

Interesting that this should come now, as I’m working my way through the 9th Step. Right now I’m doing letters to dead and otherwise unavailable people, moving to letters that can be mailed, before proceeding with Internet, phone, and face-to-face amends.

Everything I needed to get the process of a short sale started was readily available, so after speaking with the person and doing some research to be sure this isn’t a scam, I rounded it all up and sent it on over. That person mentioned that it usually takes a month or so to do the part I did in about six hours. But everything I needed was right there.

My spouse and I are also doing a new budget, now that we are at the half-year mark and understand what changes to our finances this being married thing has wrought. We’re both religious folk, so this has brought up the topic of tithing, which has also brought up the topic of our (individual and differing) faiths both in general and specifically.

I also need to meet with a representative of the faith to which I no longer belong. There are, I think, some administrative and community tasks that need to be done to formalize my separation from that religious body. Whether I’ve done so or not has an effect on my relationship to its adherents, so it’s helpful to settle it. It’s probably also good for my soul to get some resolution on what happened, and why I subscribe to the faith that I do now. I’d like to get some peace around this.

Part of inventorying the budget has also brought to light some recurring expenses for various friends and organizations that I’ve just been paying, as a donation or a gift. These are teensy tiny annual expenses, and I don’t mind, but part of doing my 7th Tradition and letting others do theirs compels me to reach out to these folks to ask what they want done with them. It’s not really fair to them, to myself, and to my family for me to keep on silently handling these costs.

So far, one has responded to let the expense go – they don’t need the service anymore. Two others are sending me checks to cover the costs. I have a boundary that if I haven’t heard back from the others within a reasonable period of time and after a couple of reminders, I’ll let those go as well, as they plainly are not vital services to those folks.

Another sudden 9th Step money thing is the realization that I owe someone money. I had borrowed money from someone with a clear expectation of paying it back, and then got into an arrangement with them wherein they were expected to contribute and they didn’t. I rationalized and justified and wrote off my debt to that person out of hand. I put it out of my mind completely, only remembering it while going through my amends list. I have to talk this over with my sponsor and with the individual involved to see what the correct amends would be, but some repayment at least is in order. Oddly, I’m not afraid of this.

I do feel some anxiety about my 9th step, but nothing like the stark fear I used to feel. I feel well-equipped for this. The Steps are in order for a reason, and I can clearly see it now.